A revised application submitted to the City brings changes to a proposed residential tower at 7 Labatt Avenue near Queen and River streets on the east side of Downtown Toronto. Developers TAS and Tricon resubmitted plans for the project in late 2019 with a new design by HOK, which has evolved in the months since.

The most recent update is a mid-May, 2020 application seeking Site Plan Plan Approval following a Minor Variance Application prepared in December to address certain items flagged in the last submission’s zoning review. The proposal generally remains in accordance with site-specific by-laws adopted by City Council at the end of 2016, and the current revisions make minor changes to the exterior design, unit count, and other elements. At ground level, a focal point of the revisions is the improvement of the building’s relationship with pedestrian and cycling infrastructure. 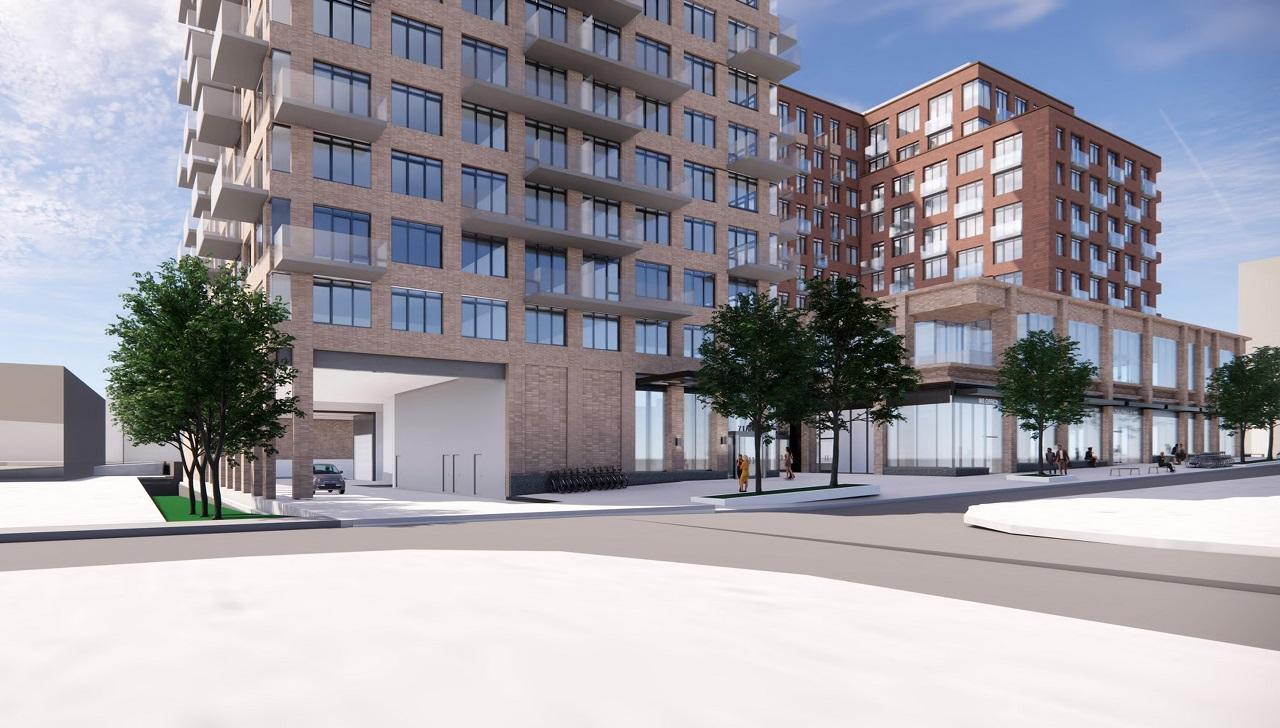 In response to comments from Planning staff, the exterior design has been refined in the updated submission. The number of balconies has been reduced and balcony depths have been minimized. The resulting re-positioned balcony placement and revised balcony cladding helps to create more variety on the exterior, revealing more of the primary building envelope. City staff’s request for a material sample board following the previous submission has been addressed, showing a mix of cladding that includes brick-faced precast panels with blends of red and beige brick, white precast concrete, bronze anodized aluminum, and double-pane low-E glazing for punched windows. 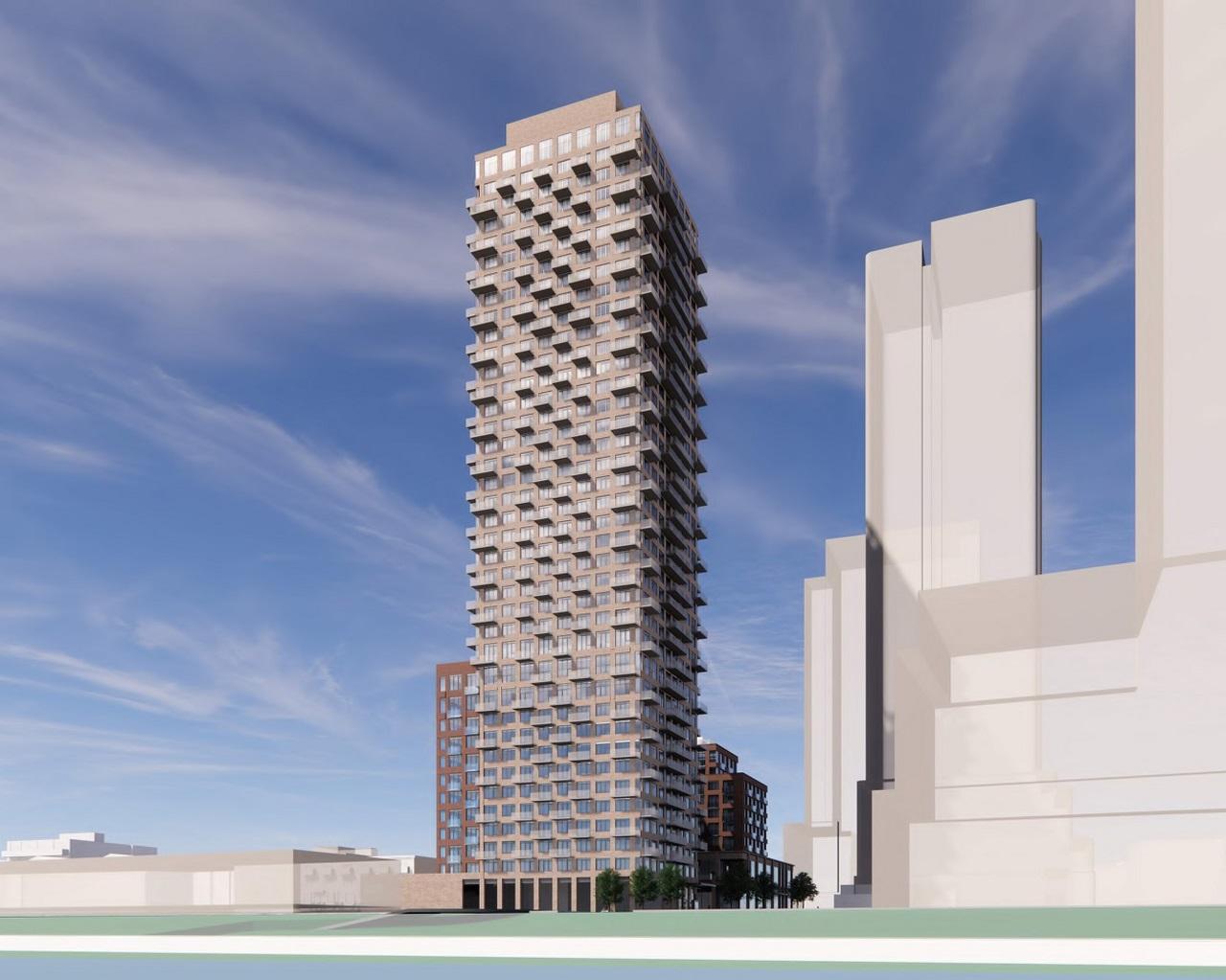 The minor variance is being sought in exception to a zoning by-law, reflecting a few elements of the project that don’t fully conform with the site-specific by-laws. Among these, the current plan’s tower width above the 28th floor slightly exceeds the accepted conditions. Another variance request is to permit only 209 parking spaces, in exception to by-laws requiring 270 spaces for a project of this size.

The previous plan called for 252 rental units and 295 condominium units, since revised to 257 rentals and 301 condo units. The overall unit mix has been revised to comply with a requirement that at least 20% of all units on the site must have two or more bedrooms, and a further 10% to have three or more bedrooms. The current unit mix is now proposed as 26 studios, 314 one-bedrooms, 152 two-bedrooms, and 66 three-bedroom units.

Other revisions include changes to the residential common and amenity spaces, most notably the separation of condo and rental amenities and the allocation of independent lobby spaces for the two tenure types. Specific amenities have been relocated to allow more natural light, while the types of amenities has been refined. An element of the building’s proposed Salvation Army space has also been revised, with a previously-proposed outdoor terrace now planned as an enclosed sunroom space for maintenance and noise-mitigation purposes.

You can learn more from our Database file for the project, linked below. If you’d like to, you can join in on the conversation in the associated Project Forum thread, or leave a comment in the space provided on this page. 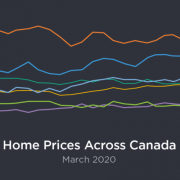 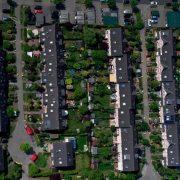 Changes to the Land Use Planning Appeal System 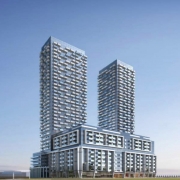 37-storey tower duo pitched for The Queensway and Kipling Avenue

Bank of Canada cuts rate for third time to 0.25% in bid to shield economy from coronavirus fallout 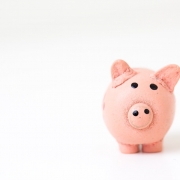 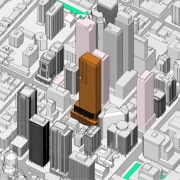 Historical Data Shows Housing Market Will Boom After The 2020 Crisis, And So Will Bitcoin
0 replies

No Nosedive Ahead for Canadian Real Estate Prices: RE/MAX
Scroll to top