According to the January National Rent Report from Rentals.ca and Bullpen Research & Consulting, the average monthly asking rent for Canada rose 4.3 per cent year over year at the end of December.

In Montréal, expensive downtown listings in 2019 outnumbered those in 2018. Average monthly rents went from $1,286 to $1,611 year over year. In Vancouver, higher-rent condominium apartment listings on Rentals.ca in 2019 exceeded those in 2018.

According to the report, young tenants in all three municipalities are looking for walkable downtown communities where they can live without the expense of owning and parking a car — and without a crippling commute. To deal with affordability, young professionals are squeezing into smaller units and living with roommates well into their 30s.

The report suggests that rental affordability is expected to get worse in 2020 in Ontario and British Columbia, despite an increase in new rental apartment construction, and the crackdown on empty units and AirBnB in several markets.

Rentals.ca is forecasting more modest rental growth in 2020 versus 2019, but the expectation is average rents will grow faster than inflation in most major markets outside of Alberta and Saskatchewan.

With Bullpen Research & Consulting, Rentals.ca also forecasts annual rental rates could increase in 2020 by as much as 7 per cent in Toronto, 5 per cent in Montréal, 4 per cent in Ottawa and 3 per cent in Vancouver.

In the January report, Toronto had the priciest average monthly rent of the 30 cities on the list for a one-bedroom home at $2,299 and for a two-bedroom at $2,914.

The average rent for Canadian properties listed on Rentals.ca in December 2019 was $1,854 per month, a decrease of 3.3 per cent monthly (even with an annual increase of 4.3 per cent).

Rentals.ca partner Local Logic provided insights for renters lifestyle interests and found many millennial families want more than anything to live near a quality school.

“As more families continue to rent as opposed to buy, we see renters for larger homes are willing to sacrifice their ability to take transit or walk to get their groceries in favour of being near a quality school,” says Vincent-Charles Hodder, CEO of Local Logic. “We expect the rental markets to perform strong in areas close to schools in 2020.”

When considering rental and condominium apartments only, two cities experienced more than 20 per cent rent appreciation from December 2018 to December 2019. Scarborough topped the list at 24.3 per cent, and Montréal had 22.6 per cent annual growth. Winnipeg achieved the third highest gains at 19.9 per cent; Vancouver went up 13.6 per cent and Toronto increased 10 per cent. 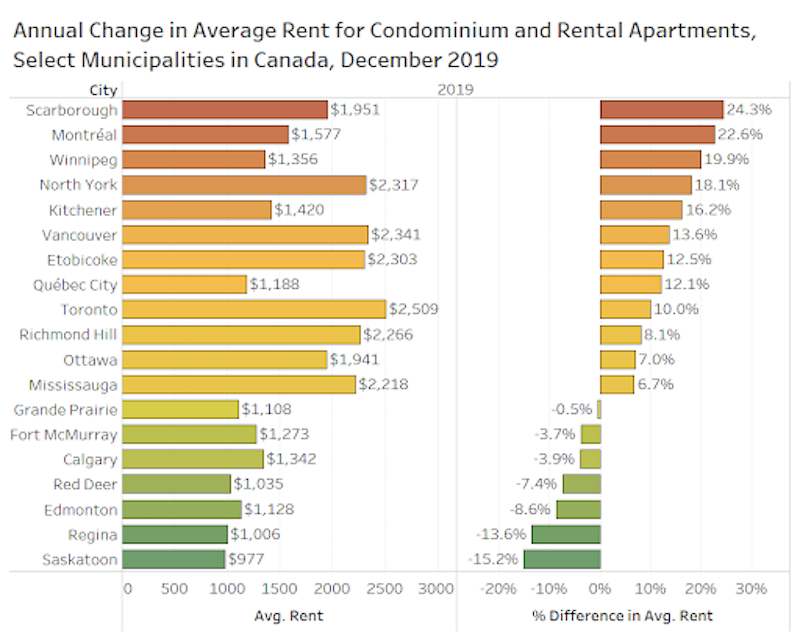 Saskatoon experienced a substantial rent drop of 15.2 per cent, with Regina not far behind at 13.6 per cent. The average rent in Edmonton declined by 8.6 per cent, Red Deer dropped 7.4 per cent, and Calgary declined by 3.9 per cent.

On a provincial level, Ontario had the highest rental rates in the fourth quarter of 2019, with landlords seeking $2,318 per month on average for all property types.

Ontario also has the highest share of condominium apartment listings at 37 per cent of the provincial total. British Columbia had the second highest rental rate at $1,928 per month, while Newfoundland and Labrador had the lowest at $954. 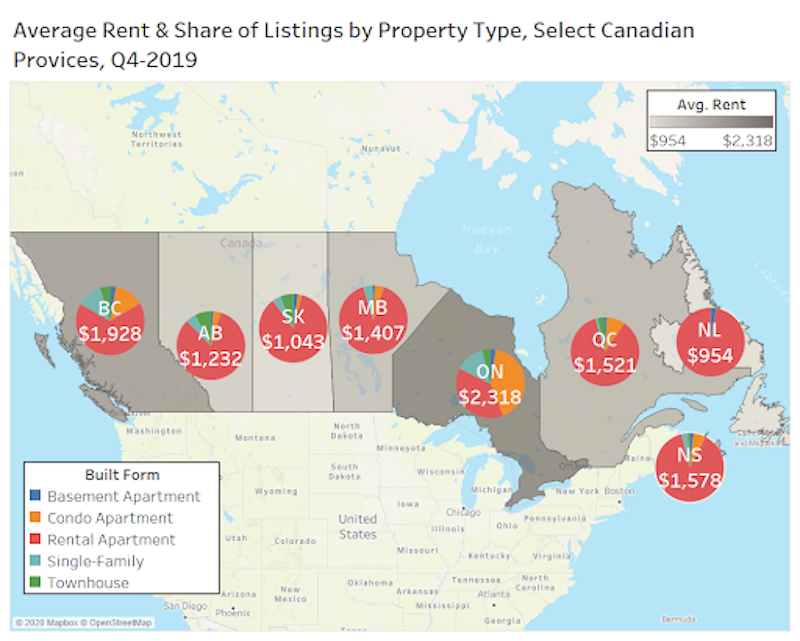 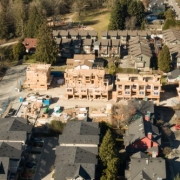 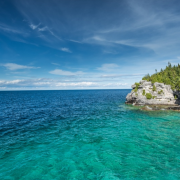 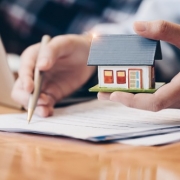